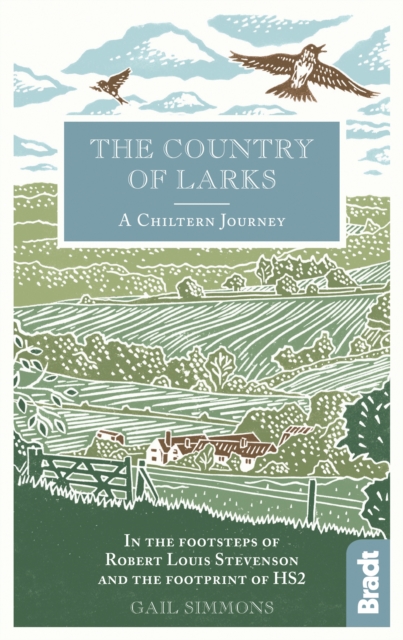 The Country of Larks

Reserve a copy of The Country of Larks for collection at the Marlow Bookshop. If you provide your email address below, we will contact you when this item is ready for collection. For delivery by post add the address to the order notes and we will be in touch to arrange payment.

Travel writer and journalist Gail Simmons follows in the footsteps of Robert Louis Stevenson as she walks from High Wycombe in Buckinghamshire to Tring in Hertfordshire via Great Missenden and Wendover, tracing not only the changes in the landscape of the last 150 years but also those yet to come with the imminent arrival of the controversial HS2, the high-speed railway from London to Birmingham. Just as Stevenson spoke to people he met along the way, Simmons encounters those whose lives will be affected by HS2: a tenant farmer, a retired businessman-turned-campaigner, a landscape historian and a conservationist.

In the autumn of 1874 a young, unknown travel writer called Robert Louis Stevenson walked from High Wycombe in Buckinghamshire to Tring in Hertfordshire. He wrote up his three-day journey across the Chiltern Hills in an essay titled In the Beechwoods, penned a decade before he found fame as the author of Treasure Island and The Strange Case of Dr Jekyll and Mr Hyde. Stevenson observed the natural world, reflecting on the experience of walking across this landscape at a time when England was still largely agrarian and when most people still earned their living from working the land.

During his walk he was accompanied by a ‘carolling of larks’ that was so integral to his journey he ‘could have baptized it “The Country of Larks” ‘. Almost 150 years later Simmons walks across the same landscape, observing the loss of flora, fauna and the whole rural way of life, replaced by commuters and dormitory villages, a trend portrayed by John Betjeman in Metro-land (1973), which described suburban life alongside the Metropolitan Railway. Divided into three parts to parallel Stevenson’s journey the book offers a detailed, almost forensic, examination of this distinctive landscape of English chalk downland interwoven with recollections from Simmons of growing up in a Chilterns commuter village.

‘I might have left long ago’ she says, ‘but this place still matters to me’.